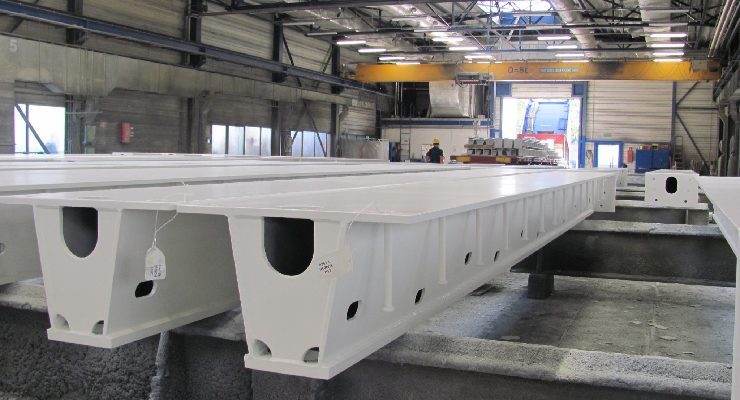 One of the new industrial facilities in our area has become Karasai Machine-Building Plant LLP. This is a promising production, which gives high-quality metal structures, and jobs, and solid injections into the state treasury. Director of the plant Sergey Tkachuk introduced us to the plant’s activities.

It should be noted that Karasai Machine-Building Plant LLP is a subdivision of the well-known multidisciplinary Kazakhstan company “PSI Group”, which pays special attention to mining and oil and gas companies, covers a wide variety of industries. More than a thousand people work in it. As for the Karasai plant, it was named machine-building with a view to the future. In the meantime, high-quality metal structures are produced here.

The company is located in the Yalta Rural District. The first peg during the construction of this rather large facility was jammed in mid-September 2015, and already in 2016, step by step, the commissioning work began. At the first stage, 4.2 billion tenge was invested exclusively in private funds, in the future this figure will increase to 20 billion.

First of all, communications were made, infrastructure was established. “As for water supply, we have two wells with a depth of 200 meters each,” Sergey Mikhailovich explained. – Gas supply has been established. It has its own boiler room. Solving the problem of power supply, while we are powered by the backup circuit from the railway. But we live in the hope that in the near future with the commissioning of the new substation additional capacities will appear. The issue of railway deadlock is being worked out. The construction of a training center and a dining room is nearing completion …

Already today, 94 workers are working here, including 37 welders from the nearby villages of our and Ili regions. The total number of employees together with engineering personnel

is 120 people. Given that so far only the first phase of the plant has been commissioned, in the future, with the further development of the enterprise, the number of employees will increase to 500 people. Moreover, the issue of training their own personnel is being addressed.

The fact is that they are nearing completion of the construction of a training center for training, according to international standards, welders and fitters, so necessary for this production. They are being conducted jointly with the Swedish company ESAB.

The territory allotted for this production is 22 ha. So far, only five hectares are used. The area of ​​the first phase of construction alone is 18,800 square meters. meters. The lion’s share, and this is 12,700 square meters. meters, reserved for the main production workshop, 3,500 – for the administrative building for management personnel and engineering staff, two thousand square meters each for a paint shop and a covered storage area, 800 for a training center.

And here we are in a large spacious production workshop, where on the Industrialization Day a teleconference took place with the participation of Elbasy and the head of our region Amandyk Batalov. Sergei Mikhailovich, guiding us from one line to another, gave them
characteristics, explained the features and subtleties of this rather
heavy steel production. The general fact is that all these lines are high-performance, high-precision, with a CNC system, that is, with computerized drive control of technological equipment.

For example, the capacity of the steel profile processing line of the German company Kaltenbach is up to 20 thousand tons per year. Here, shot blasting, linear measurements, hole drilling and milling, marking of workpieces and joining points of mating parts in three axes, as well as cutting of the ends of the workpieces at an angle from 90 to plus or minus 30 degrees are carried out here.

On the line of the Italian company Ficep, drilling, milling, marking of products, as well as plasma and gas-oxygen cutting, are also carried out. For cutting sheets with a thickness of up to 10 mm and a cut length of up to 6100 mm, hydraulic scissors from the Turkish company Baycal are used. This unit is also equipped with a CNC system that provides control and monitoring of up to 60 functions.

There is also a press brake of the same company in the production workshop, which is used for bending sheets, including those with a sheet thickness of 10 mm and a bend length of 6100 mm in the entire length of the tool. And the CNC control system in this case provides the maximum accuracy of bending angles.

Docking of sheets is made on the Italian equipment of Nuova CMM firm. In automatic mode, operations such as oxy-fuel cutting of the ends of the sheets, as well as subsequent automatic sub-flux welding of sheets with a width of 500 to two thousand millimeters, are performed here. This line is also used for portal gas-oxygen and plasma cutting of sheets with a thickness of 0.5 to 80 mm, a width of up to 2,500 mm and a length of up to 16,600 mm. Well, and six jointly cutting oxy-fuel cutters and one plasma torch allow you to cut a steel sheet, while simultaneously receiving up to seven longitudinal blanks for further assembly of welded profiles – the same beams and columns.

There is also an automated line for the production of welded beams and profiles of the same Italian company Nuova CMM, on which two-sided automatic welding of profile elements is performed.

It is also important that welding work is performed on modern equipment of the Swiss company ESAB and the American equipment Lincoln. At the same time, 32 welding posts were organized for the final assembly of beams, columns and other metal structures.

As we can see for ourselves, the plant is unique in modern, high-tech equipment with digital control. The production capacity of the enterprise is 1,500 tons of metal structures per month and 18 thousand tons per year. Raw materials, that is, steel, depending on customer requirements, can be imported both from Karaganda and from Europe, South Korea, and Japan.

Already in the second turn, it is planned to launch a hot galvanizing workshop, which will have

galvanized up to 60 thousand tons of metal structures per year. It is planned to do this by the end of this year. According to Sergei Mikhailovich, this is a huge bath. Its dimensions are 13 meters long, 1 meter 60 centimeters wide and 3 meters 30 centimeters deep. This is already a completely separate production, which has completely different tasks. He also noted the fact that galvanized iron has great strength and lasts up to 60–70 years. This is precisely what prompted the company’s management to develop this area.

Over time, it is planned to establish hardware production here. This is the manufacture of nails, bolts, nuts, studs, screws, screws and much more. It would not hurt to revive the blacksmith’s production, which is always in great demand.

In a word, the solution of even more serious problems remains. Apparently, here they are not accustomed to stop there, but go ahead, setting new goals. In this way, they create a serious basis for the production of machines in the near future, in order to match their name one hundred percent.